Deep Learning for Videos: A 2018 Guide to Action Recognition

Medical images like MRIs, CTs (3D images) are very similar to videos - both of them encode 2D spatial information over a 3rd dimension. Much like diagnosing abnormalities from 3D images, action recognition from videos would require capturing context from entire video rather than just capturing information from each frame.

In this post, I summarize the literature on action recognition from videos. The post is organized into three sections -

Action recognition and why is it tough?

Action recognition task involves the identification of different actions from video clips (a sequence of 2D frames) where the action may or may not be performed throughout the entire duration of the video. This seems like a natural extension of image classification tasks to multiple frames and then aggregating the predictions from each frame. Despite the stratospheric success of deep learning architectures in image classification (ImageNet), progress in architectures for video classification and representation learning has been slower.

What made this task tough?

It must be noted here that abnormality detection from 3D medical images doesn’t involve all the challenges mentioned here. The major differences between action recognition from medical images are mentioned as below

Before deep learning came along, most of the traditional CV algorithm variants for action recognition can be broken down into the following 3 broad steps:

Of these algorithms that use shallow hand-crafted features in Step 1, improved Dense Trajectories [6] (iDT) which uses densely sampled trajectory features was the state-of-the-art. Simultaneously, 3D convolutions were used as is for action recognition without much help in 2013[7]. Soon after this in 2014, two breakthrough research papers were released which form the backbone for all the papers we are going to discuss in this post. The major differences between them was the design choice around combining spatiotemporal information.

As can be seen in Fig 3, the consecutive frames of the video are presented as input in all setups. Single frame uses single architecture that fuses information from all frames at the last stage. Late fusion uses two nets with shared params, spaced 15 frames apart, and also combines predictions at the end. Early fusion combines in the first layer by convolving over 10 frames. Slow fusion involves fusing at multiple stages, a balance between early and late fusion. For final predictions, multiple clips were sampled from entire video and prediction scores from them were averaged for final prediction.

Despite extensive experimentations the authors found that the results were significantly worse as compared to state-of-the-art hand-crafted feature based algorithms. There were multiple reasons attributed for this failure:

In this pioneering work [June 2014] by Simmoyan and Zisserman, the authors build on the failures of the previous work by Karpathy et al. Given the toughness of deep architectures to learn motion features, authors explicitly modeled motion features in the form of stacked optical flow vectors. So instead of single network for spatial context, this architecture has two separate networks - one for spatial context (pre-trained), one for motion context. The input to the spatial net is a single frame of the video. Authors experimented with the input to the temporal net and found bi-directional optical flow stacked across for 10 successive frames was performing best. The two streams were trained separately and combined using SVM. Final prediction was same as previous paper, i.e. averaging across sampled frames.

Though this method improved the performance of single stream method by explicitly capturing local temporal movement, there were still a few drawbacks:

Following papers which are, in a way, evolutions from the two papers (single stream and two stream) which are summarized as below:

The recurrent theme around these papers can be summarized as follows. All of the papers are improvisations on top of these basic ideas.

For each of these papers, I list down their key contributions and explain them. I also show their benchmark scores on UCF101-split1.

In a previous work by Ng et al[9]. authors had explored the idea of using LSTMs on separately trained feature maps to see if it can capture temporal information from clips. Sadly, they conclude that temporal pooling of convoluted features proved more effective than LSTM stacked after trained feature maps. In the current paper, authors build on the same idea of using LSTM blocks (decoder) after convolution blocks(encoder) but using end-to-end training of entire architecture. They also compared RGB and optical flow as input choice and found that a weighted scoring of predictions based on both inputs was the best. 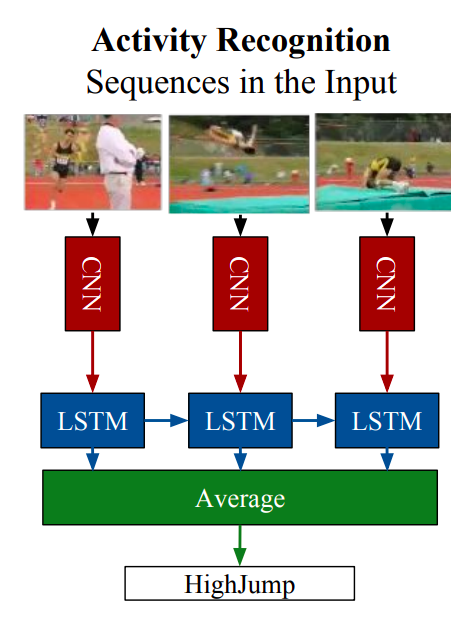 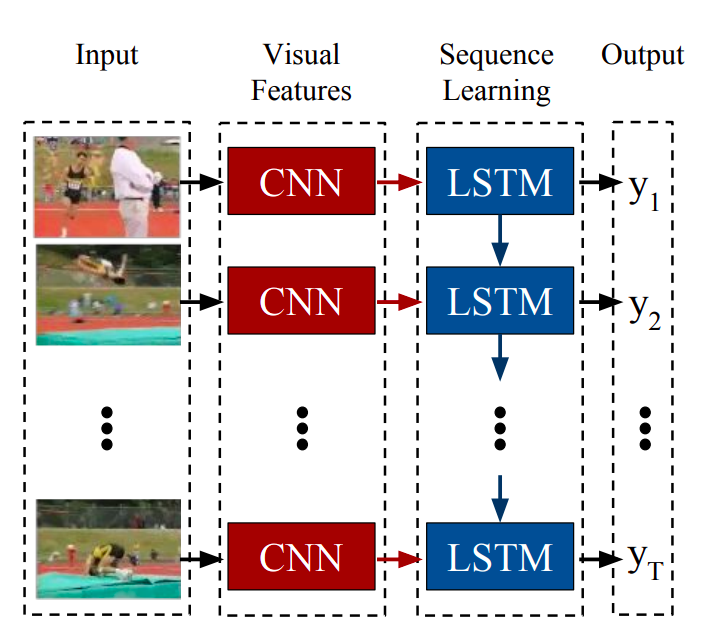 Even though the authors suggested end-to-end training frameworks, there were still a few drawbacks

Varol et al. in their work[10] tried to compensate for the stunted temporal range problem by using lower spatial resolution of video and longer clips (60 frames) which led to significantly better performance.

In this work authors built upon work by Karpathy et al. However, instead of using 2D convolutions across frames, they used 3D convolutions on video volume. The idea was to train these vast networks on Sports1M and then use them (or an ensemble of nets with different temporal depths) as feature extractors for other datasets. Their finding was a simple linear classifier like SVM on top of ensemble of extracted features worked better than she ttate-of-the-art algorithms. The model performed even better if hand crafted features like iDT were used additionally.

The other interesting part of the work was using deconvolutional layers (explained here) to interpret the decisions. Their finding was that the net focussed on spatial appearance in first few frames and tracked the motion in the subsequent frames.

During training, five random 2-second clips are extracted for each video with ground truth as action reported in the entire video. In test time, 10 clips are randomly sampled and predictions across them are averaged for final prediction.

The long range temporal modeling was still a problem. Moreover, training such huge networks is computationally a problem - especially for medical imaging where pre-training from natural images doesn’t help a lot. 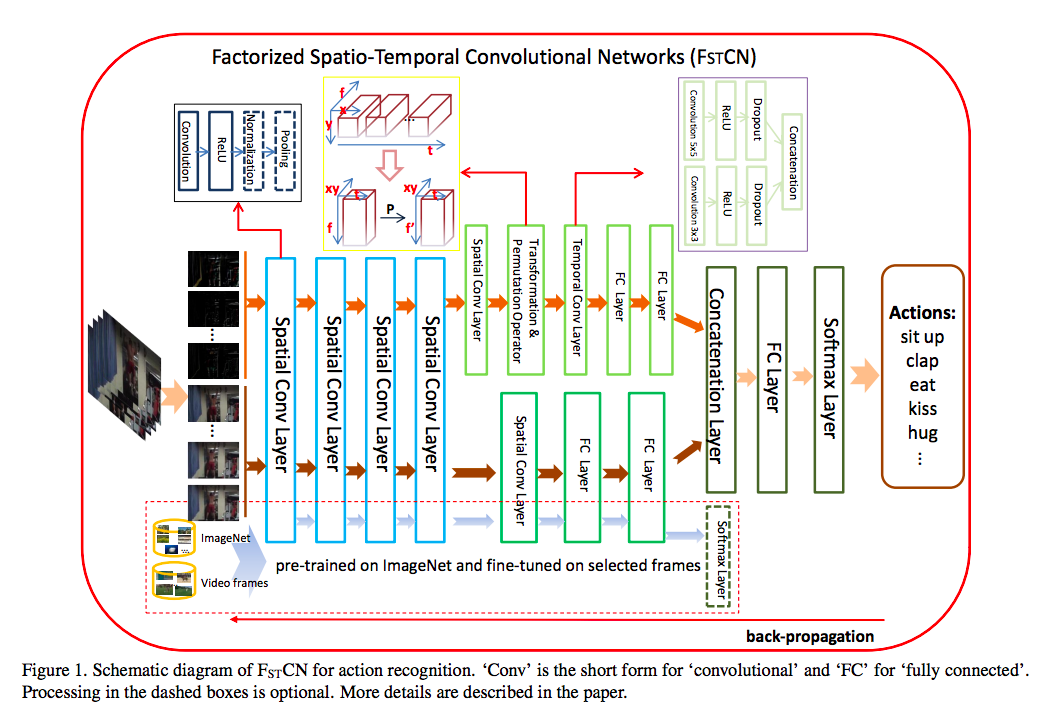 FSTCN paper and the factorization of 3D convolution Source.

Although this work is not directly related to action recognition, but it was a landmark work in terms of video representations. In this paper the authors use a 3D CNN + LSTM as base architecture for video description task. On top of the base, authors use a pre-trained 3D CNN for improved results. 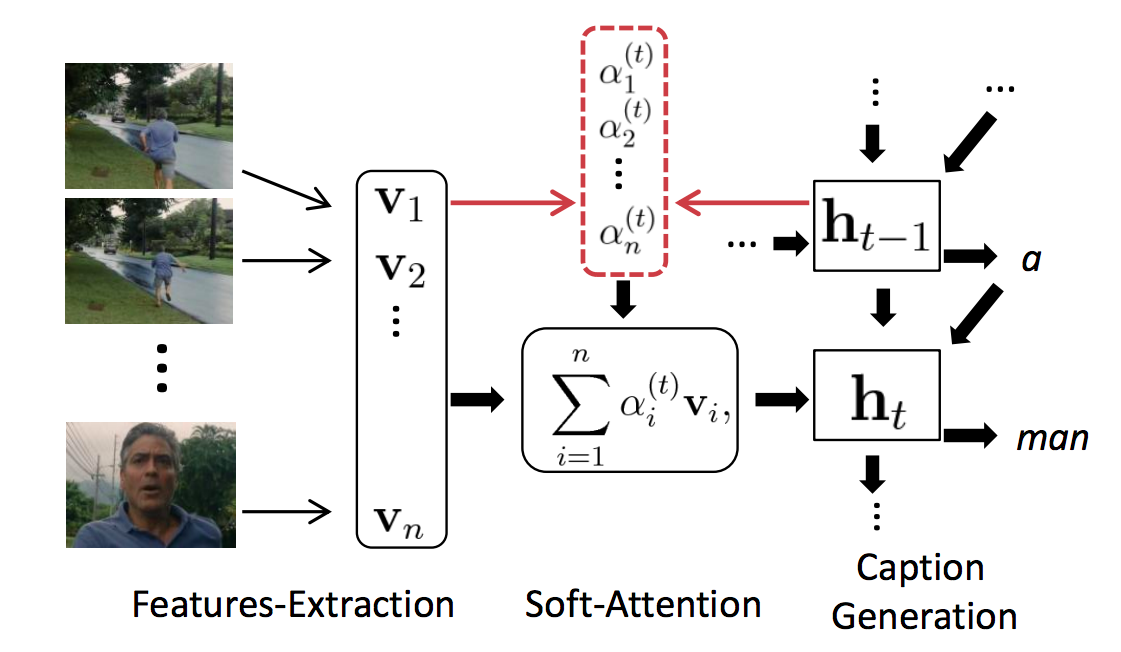 This was one of the landmark work in 2015 introducing attention mechanism for the first time for video representations.

In this work, authors use the base two stream architecture with two novel approaches and demonstrate performance increment without any significant increase in size of parameters. The authors explore the efficacy of two major ideas.

Everything from two stream architecture remains almost similar except

Two stream fusion architecture. There are two paths one for step 1 and other for step 2 Source.

My comments: The authors established the supremacy of the TwoStreamFusion method as it improved the performance over C3D without the extra parameters used in C3D.

In this work authors improved on two streams architecture to produce state-of-the-art results. There were two major differences from the original paper

The other important part of the work was establishing the problem of overfitting (due to small dataset sizes) and demonstrating usage of now-prevalent techniques like batch normalization, dropout and pre-trainign to counter the same. The authors also evaluated two new input modalities as alternate to optical flow - namely warped optical flow and RGB difference.

During training and prediction a video is divided into K segments of equal durations. Thereafter, snippets are sampled randomly from each of the K segments. Rest of the steps remained similar to two stream architecture with changes as mentioned above.

The work attempted to tackle two big challenges in action recognition - overfitting due to small sizes and long range modeling and the results were really strong. However,the problem of pre-computing optical flow and related input modalities was still a problem at large.

In this work, the most notable contribution by the authors is the usage of learnable feature aggregation (VLAD) as compared to normal aggregation using maxpool or avgpool. The aggregation technique is akin to bag of visual words. There are multiple learned anchor-point (say c1, …ck) based vocabulary representing k typical action (or sub-action) related spatiotemporal features. The output from each stream in two stream architecture is encoded in terms of k-space “action words” features - each feature being difference of the output from the corresponding anchor-point for any given spatial or temporal location.

While max or average pooling are good for similar features, they do not not adequately capture the complete distribution of features. ActionVlAD clusters the appearance and motion features and aggregates their residuals from nearest cluster centers. Source.

Everything from two stream architecture remains almost similar except the usage of ActionVLAD layer. The authors experiment multiple layers to place ActionVLAD layer with the late fusion after conv layers working out as the best strategy.

My comments: The use of VLAD as an effective way of pooling was already proved long back. The extension of the same in an end-to-end trainable framework made this technique extremely robust and state-of-the-art for most action recognition tasks in early 2017.

Optical flow can be regarded as an image reconstruction problem. Given a pair of adjacent frames I1 and I2 as input, our CNN generates a flow field V. Then using the predicted flow field V and I2, I1 can be reconstructed as I1’ using inverse warping such that difference between I1 and it’s reconstruction is minimized.

The authors explored multiple strategies and architectures to generate optical flow with largest fps and least parameters without hurting accuracy much. The final architecture was same as two stream architecture with changes as mentioned:

The authors also demonstrate improvement in performance using TSN based fusion instead of conventional architecture for two stream approach.

My comments: The major contribution of the paper was to improve speed and associated cost of prediction. With automated generation of flow, the authors relieved the dependency on slower traditional methods to generate optical flow.

This paper takes off from where C3D left. Instead of a single 3D network, authors use two different 3D networks for both the streams in the two stream architecture. Also, to take advantage of pre-trained 2D models the authors repeat the 2D pre-trained weights in the 3rd dimension. The spatial stream input now consists of frames stacked in time dimension instead of single frames as in basic two stream architectures.

The major contribution of the paper was the demonstration of evidence towards benefit of using pre-trained 2D conv nets. The Kinetics dataset, that was open-sourced along the paper, was the other crucial contribution from this paper.

TTL Layer along with rest of DenseNet architecture. Source.

Apart from the above, the authors also devise a new technique of supervising transfer learning betwenn pre-trained 2D conv nets and T3D. The 2D pre-trianed net and T3D are both presented frames and clips from videos where the clips and videos could be from same video or not. The architecture is trianed to predict 0/1 based on the same and the error from the prediction is back-propagated through the T3D net so as to effectively transfer knowledge.

The architecture is basically 3D modification to DenseNet [12] with added variable temporal pooling.

Although the results don’t improve on I3D results but that can mostly attributed to much lower model footprint as compared to I3D. The most novel contribution of the paper was the supervised transfer learning technique.