ByteTrack is a multi-object tracking algorithm. As of writing this blog, it is the SOTA on MOT17 and MOT20 datasets. 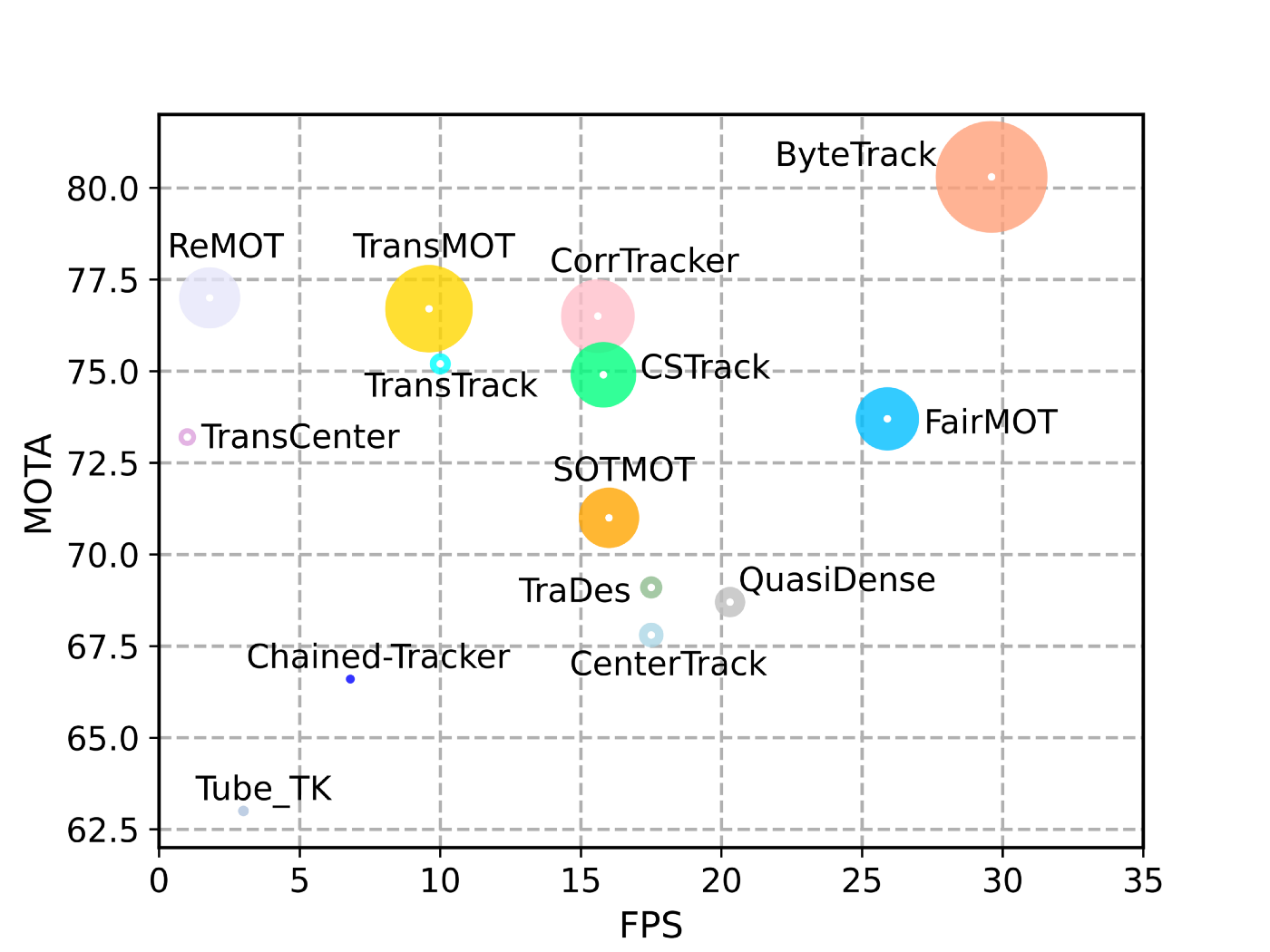 To completely understand this paper we will divide this post into the following sections:

Multi-object tracking (MOT) aims at estimating bounding boxes and identities of objects in videos. A simple tracking algorithm can involve the following steps.

Next, we use some algorithms like ByteTrack to associate these detection boxes across frames. In the image below, after applying the tracking algorithm we assign a tracking id to each object (persons). Here, objects with the same tracking ids are shown in the same color.

Note: There are variations in how different tracking algorithms work than what I have mentioned above. In general, any algorithm which does detection first and then uses that detection result to get tracking ids are called Tracking-by-detection. We will discuss some of those variations later.

I am not going into the details of detection. Let’s assume we are using one of the detection models(Yolov5, YoloX , RetinaNet and so on.) to get the bounding boxes from each frame. Note the official implementation of ByteTrack uses the YoloX model as object-detector.

Now for bounding box association, we can use two logic as follows: 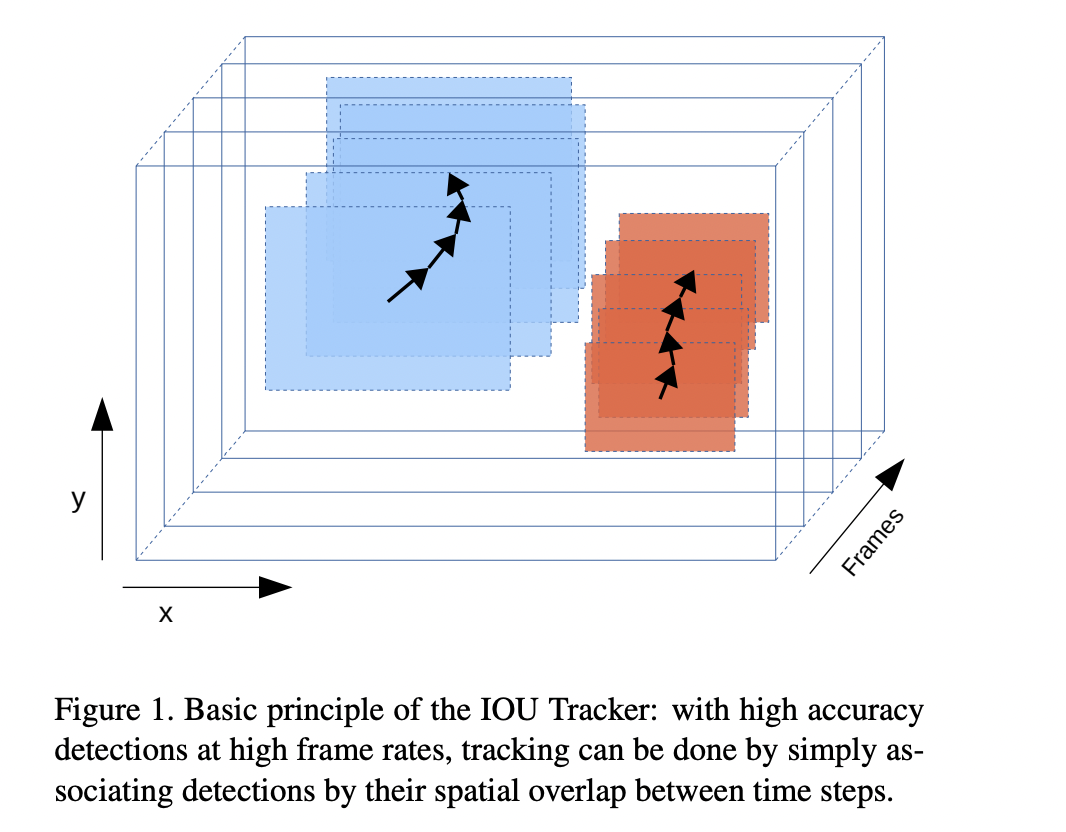 Now if we calculate the IoU of detected bounding boxes, the same objects will have high overlap across frames than two different objects. In the above image, if we take any two consecutive frames the IoU for blue-blue or red-red boxes will be higher than for blue-red boxes. This way if two detected boxes have high IoU in two consecutive frames, we can give the same tracking id (in the image above, objects with the same tracking ids are in the same color).

Comparison of location-based and feature-based trackers

Location-based tracker fails when there is movement in-camera because then there might be high relative movement of an object across the frame the IoU value would be 0. In this case, the feature-based method will work because the relative position does not matter here.

If the detection algorithm has a low recall, then there will be objects which will be missed by the detector and if the detector fails for the same object continuously then when it will be detected again it might not have positive IoU with the last detected instance of this object in the previous frame.

Feature-based methods work fine with models with low recall. Here instead of checking one of the previous frames for matches, we can check some N numbers of the previous frames, so that even if the model does not detect an object in some of the frames when it detects the object again we have some old history to assign the same tracking id instead of a new one.

The feature-based method fails if there is very little distinction between two objects. For example, for tracking objects on a high-altitude thermal camera. Here every person will be a white blob (or black-blob based on the camera in white-hot mode or black hot mode) and will have a similar feature. The location-based method works fine here.

Location-based methods take the assumption that cameras will have high FPS. Because most of the recent cameras have more than 30 FPS, it should not cause any issues.

ByteTrack is an IoU-based association algorithm. Most methods obtain identities by associating detection boxes whose scores are higher than a threshold. The objects with low detection scores, e.g. occluded objects, are simply thrown away, which brings non-negligible true object missing and fragmented trajectories. To solve this problem, ByteTrack uses both high and low-confidence bounding boxes.

Let’s assume a few things to understand the pseudo-code: The inputs are as follows: A video sequence V; object detector Det(this is YoloX); detection score threshold τ. The output would be: Tracks T of the video. In beginning, we will start with empty tracks. 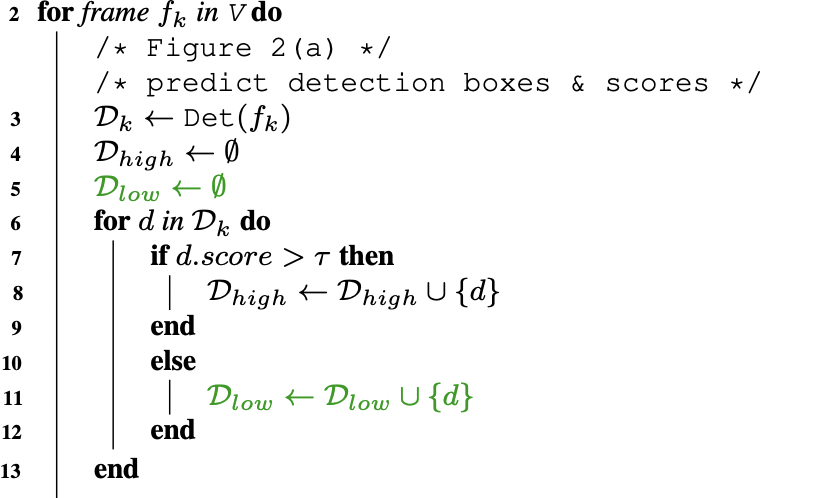 The first association is performed between the high score detection boxes D_high and all the tracks T (including the lost tracks T_lost).

We keep the unmatched detections in D_remain and the unmatched tracks in T_remain. The second association is performed between the low score detection boxes D_low and the remaining tracks T_remain after the first association.

We keep the unmatched tracks in T_re−remain and just delete all the unmatched low score detection boxes, since we view them as background.

For the unmatched tracks T_re−remain after the second association, we put them into T_lost. For each track in T_lost, only when it exists for more than a certain number of frames (in paper, this value is 30 frames), we delete it from the tracks T . Otherwise, we remain the lost tracks T_lost in T

Note: for the association, we can use either location or feature-based method depending on the problem statement. The main addition of ByteTrack is of using both low and high-confidence bounding boxes.

First, We initialize a few lists to keep tracking history:

Next, we convert each detection into tracks. Then, we create a track pool by merging lost tracks with currently tracked tracks. We update track pool tracks with Kalman filter to get tracks with respect to the current frame.

Then we calculate the IoU distance between the track pool tracks and detection tracks and assign detections with tracks. We update the matched tracks with current detection boxes.

Similarly, we take low confidence bounding boxes and update the tracks (only the tracks which were not matched during the first association) with detection information from the current frame.

The remaining unmatched tracks will be added to the lost track list.

For unmatched high detection boxes, if the detection confidence is higher than det_thresh then we add them as new tracks.

For all the tracks in the lost track list, if time is higher than max_time_lost then we discard those tracks.

ByteTrack outperforms other tracking menthods on MOT17, MOT20 and HiEve test dataset by a large margin. 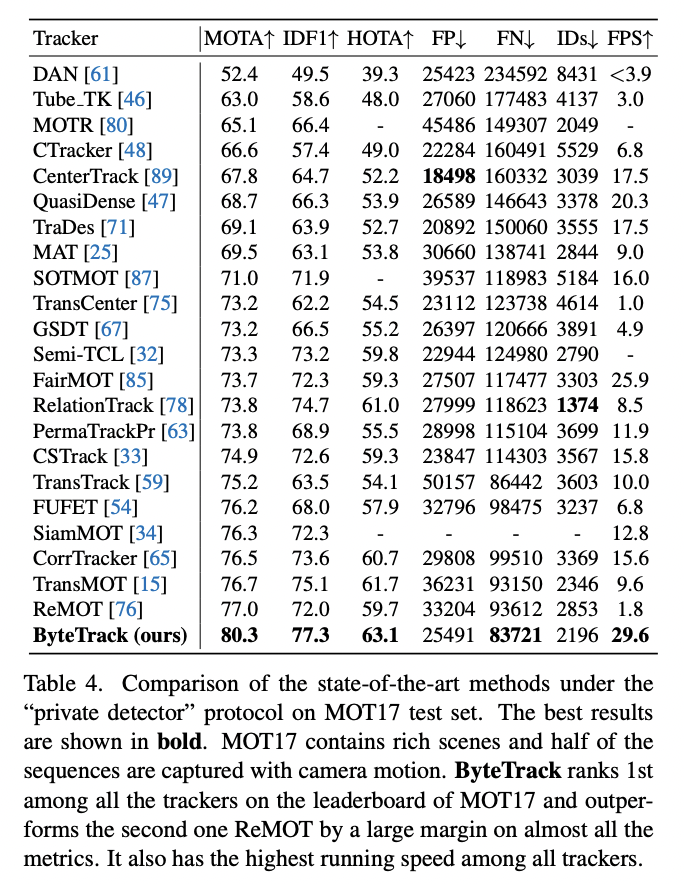 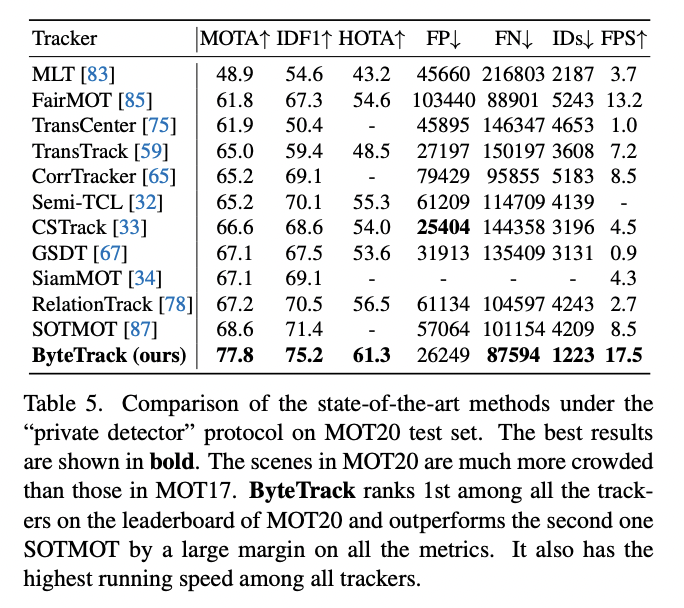 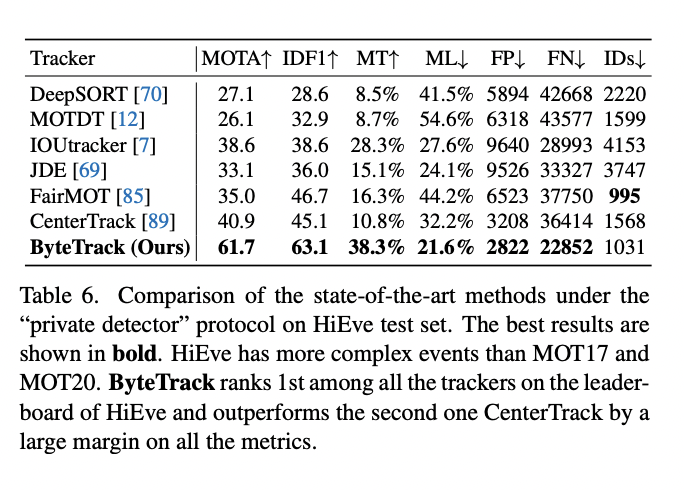 Note: There are many benchmark tests done by the authors of the paper and details are in the paper.

SOTA methods on MOT17 in papers with code

Hope you enjoyed this paper. Have a nice day.