At Qure, we build deep learning models to detect abnormalities from radiological images. These models require huge amount of labeled data to learn to diagnose abnormalities from the scans. So, we collected a large dataset from several centers, which included both in-hospital and outpatient radiology centers. These datasets contain scans and the associated clinical radiology reports.

For now, we use radiologist reports as the gold standard as we train deep learning algorithms to recognize abnormalities on radiology images. While this is not ideal for many reasons (see this), it is currently the most scalable way to supply classification algorithms with the millions of images that they need in order to achieve high accuracy.

These reports are usually written in free form text rather than in a structured format. So, we have designed a rule based Natural Language Processing (NLP) system to extract findings automatically from these unstructured reports.

An example clinical radiology report and the automatically extracted findings

Why Rule based NLP ?

Rule based NLP systems use a list of manually created rules to parse the unorganized content and structure it. Machine Learning (ML) based NLP systems, on the other hand, automatically generate the rules when trained on a large annotated dataset.

Rule based approaches have multiple advantages when compared to ML based ones:

Development of Rule based NLP

As reports were collected from multiple centers, there were multiple reporting standards. Therefore, we constructed a set of rules to capture these variations after manually reading a large number of reports. Of these, I illustrate two common types of rules below.

In reports, the same finding can be noted in several different formats. These include the definition of the finding itself or its synonyms. For example, finding blunted CP angle could be reported in either of the following ways:

We collected all the wordings that can be used to report findings and created a rule for each finding. As an illustration, following is the rule for blunted CP angle. 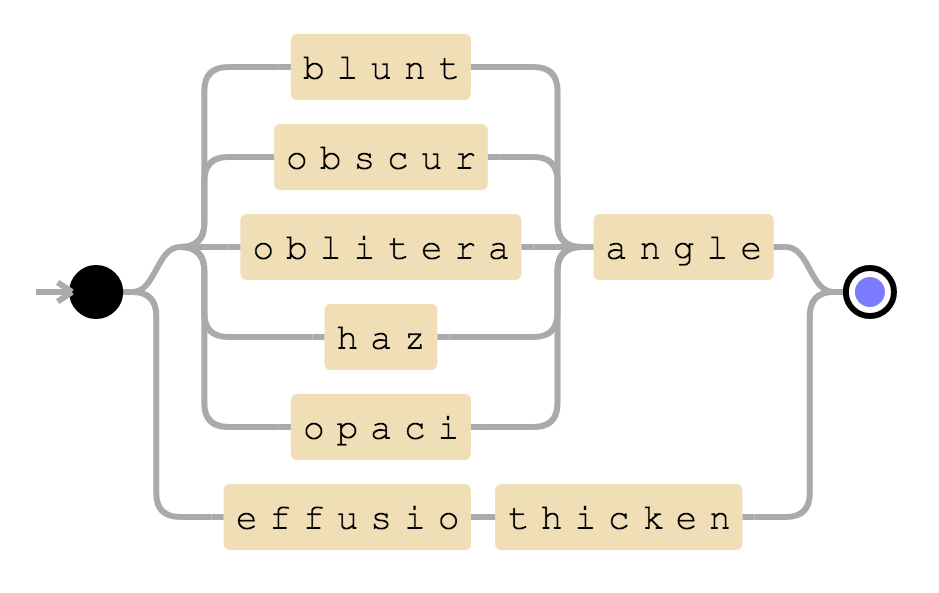 In addition, there can be a hierarchical structure in findings. For example, opacity is considered positive if any of the edema, groundglass, consolidation etc are positive. We therefore created a ontology of findings and rules to deal with this hierarchy.

Rule and hierarchy for opacity

The above mentioned rules are used to detect a finding in a report. But these are not sufficient to understand the reports. For example, consider the following sentences.

Although the findings intracerebral hemorrhage, contusion and intracranial hemorrhage are mentioned in the above sentences, their absence is noted in these sentences rather than their presence. Therefore, we need to detect negations in a sentence in addition to findings.

We manually read several sentences that indicate negation of findings and grouped these sentences according to their structures. Rules to detect negation were created based on these groups. One of these is illustrated below:

We can see that first and second sentences of above example matches this rule and therefore we can infer that the finding is negative.

We have tested our algorithm on a dataset containing 1878 clinical radiology reports of Head CT scans. We manually read all the reports to create gold standards. We used sensitivity and specificity as evaluation metrics. The results obtained are given below in a table.

In this paper[1], authors used ML based NLP model (Bag Of Words with unigrams, bigrams, and trigrams plus average word embeddings vector) to extract findings from head CT clinical radiology reports. They reported average sensitivity and average specificity of 0.9025 and 0.9172 across findings. The same across target findings on our evaluation turns out to be 0.9841 and 0.9956 respectively. So, we can conclude rule based NLP algorithms perform better than ML based NLP algorithms on clinical reports.